History suggests the market may have some more downside left

History does not repeat itself, but it rhymes, so Mark Twain supposedly said. And that is good enough to pick up some useful pointers as to what may be coming next. In fact most studies rely on empirical evidence to forecast—even chartists project their index and stock price targets based on historical price behaviour. It thus becomes imperative for us to examine historical trends in valuations to project where we could be headed in the future. And since markets globally are led by equity trends in the US, a study of the S&P-500 makes sense (to note: the Nifty Dollar Index has mirrored the S&P-500 over the years). 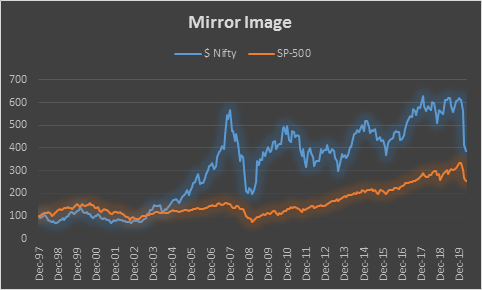 Here’s a quick perspective: the S&P-500 presently trades at about 18.7x trailing earnings. Compare that with a historical mean, median and mode PE of 15.8x, 14.8x and a range of 12.5-15x, respectively. Clearly the index is valued at about 15 percent premium to its historical average, and that could suggest the likely downside. Now, let’s look at value from a price-to-book value (or price / total shareholders’ funds) perspective. The S&P-500 presently trades at about 2.75x book value as compared to the historical mean, median and mode range of 2.9x, 2.8x and 2.5-2.8x, respectively. That’s broadly in the zone, and a the lower end of the mode could indicate a downside of about 10% at best.

At times of extreme events, though, indices tend to slip well below averages. For instance, during the global financial crisis, the P/BV of S&P-500 PE had slipped to 2x, which would imply a sharper downside of over 27% from current levels. 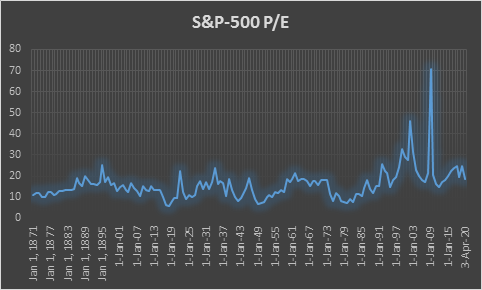 Here it must be pointed out, though, that India Inc has flattered to deceive on growth in many of the past years, with annual earnings downgrades becoming a regular phenomenon before the close of each financial year. Also, the economic promise of growth driven by factors like India’s demographic edge have yet to be realised, though the country still holds promise for long-term investors.

But what’s more important to consider, especially, when making comparisons to the global financial crisis—the most popular one these days—is the fundamental difference between the two. The financial crisis was the outcome of smart financial engineering of products that led to a ballooning of leverage and an eventual bust. It wasn’t that the financial experts couldn’t see what was brewing, it seems more like no one wanted to leave the party they were all profiting from. The problem was man-made, and other equally smart financial minds could figure how to fix it.

The coronavrius, though, is a completely different kettle of fish. It isn’t just threatening the financial sector and people’s wealth and livelihoods, it is threatening their existence and way of life. No one knows how the virus was born and no one knows how it will die. And until someone comes up with a cure and vaccine—which we all are pinning hopes will happen soon—there is no certainty that life will continue like it did before. That’s the big difference, and this could well spook the markets more than during the financial crisis